We offer the best of the Sandblast Window Film and Privacy Film supply & installation services in a Vast range of applcations @ a good price. We have a very comprehensive range of Sandblast film and Privacy film to offer to you to help tackle all your glass privacy-related issues, at your Office, Gymnasiums, Stores, Malls and other Commercial Building or your place of work. Sandblast films can also be used to hide an unsightly or unwanted view or simply to jazz up your windows and doors in terms of looks. All our window films are easy to apply and can be purchased by the metre, cut to designs based on your selection or you can have your own design on it. Not sure which film is the right one for you? Please read more to find out more. Glasses have that elegance in them and this is the reason for it being a common choice among professional designers as the best alternative to sandblasting on the glass panels, glass doors, Window, partition, etc.,

For the best Quality service and supply of Sandblast Window Film and Privacy Film solutions in Dubai, get in touch with the Window Tinting Experts (Prestige Window Films).

Looking for Privacy window film or Customizing your design on one for Office, Hotel, Restaurant, Commercial Building, School, Acedemic building, etc.,? You’ve found and reached to the right place! Prestige Window Films offers you the highest quality privacy window film products at a competitive price. Sandblasted Window Film is a perfect, easy way to add transformation to your normal window by having an added important and eye catching look! It adds color, privacy and style which adds to the beauty of your windows, glass panels and glass doors. Transform kitchen windows, bathroom, meeting rooms, personal cabins and even partitions and doors into beautiful works of art with sandblasted type of Privacy Film.

PRESTIGE WINDOW FILMS has been in the window film business for over a decade, and we continue to grow. We attribute our growth to the combination of providing the highest quality product with excellent customer service. We are here to help you get the ease and having the best experience in finding and installing the film you desire and need.

There are several ways to make your glass windows and doors attain more level of privacy, using smart looking and easy to apply window films, which will also be a pocket freindly option. The main question is how much is the level of privacy that you really need, When and where it should be? We will try to give a suggest and provide a solution to all your questions.

Let us say for an instance that you are tired of the current window film you have on your windows, doors, glass panels, partitions,etc., and you want to switch it with something different may be your own customized design. Thankfully, it is so simple and easy to remove these films from your windows. All you need to do is just peel it back. There is no residue or mess left behind.

You can do anything creative with your windows thanks to Privacy Window Film. From adding a tint to having the look of etched glass, stained glass to even two way privacy, there is no limit on this. THese window films also are available in matte finished texture. The fun part of sandblasted privacy window film is that this window film comes in various design and patterns . Abrasive blasting, more commonly known as sandblasting, is the operation of forcibly propelling a stream of abrasive material against a surface under high pressure to smooth a rough surface, roughen a smooth surface, shape a surface or remove the contaminants on a surface. A pressurised fluid, typically compressed air, or a centrifugal wheel is used to propel the blasting material (often called the media). If one installs the sandblasted film type on the glass, there is no need to do this with your glass since, the sandblast privacy film is removable easily. You can this way apply different patterns and design whenever you want on your glass.<

SandblastT and privacy window film for Office, Store outlet, Shop, Building and other workplaces are a very effective and an important way as we go for the aesthetics and styled appearance of the glass, doors, windows, partitions, etc. 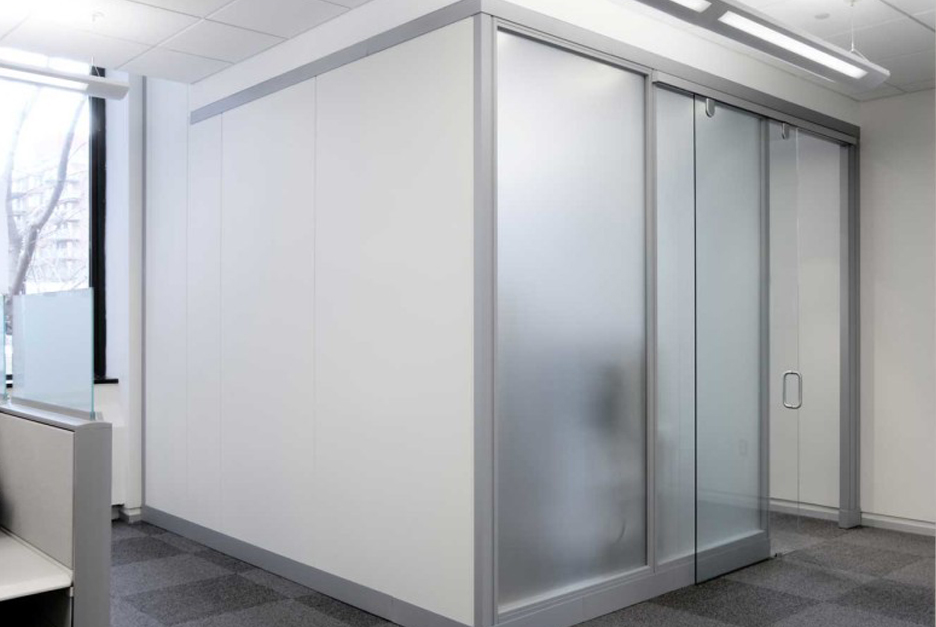 Privacy Sandblast Film are very much beneficial as we talk of the aesthetic appearance, application and its customization. The Sandblasted film adds to the glass the decorative look that same as that of a sandblasted glass itself.

The best available option so far is to acquire a window film that will cover the whole pane or part of the pane depending on the area, height and width upto to which you require privacy at your place. Privacy Window Film is an ideal solution as it can be applied directly to the existing glass, and makes it opaque just like frosted or etched glass. We have a wide range of Privacy film which can be ordered by the meter or cut to size.

If you're working out or thinking on getting something a bit more personalised we also do have a range of Decorative Sandblast Film which is frosted film embossed with various patterns ranging from flowers, blossoms and classical patterns./p>

We have also a range of Patterned Window Film and Stained Glass Films with contemporary patterns and period designs from the Ancient, Decorative art and modern design type you can select from. The designs are fully customisable and you can select to have the patterns in a colour of your choice, or in clear allowing you to see out. These designs are very popular and will add an appeal like that of a stone edging to a pavement or raised path (kerb) to your property or the place you live in or your work place in minutes.

If you still need to attain a level of privacy and want to see out through the film, then a handful of design from our range Partial Obscure Window Film might be a better solution you are looking for. The film is made of white patterns on a clear background or privacy film with no any background allowing you to see out through the gaps. These are very popular for commercial interiors like that of the Office, Shop-Front, Malls, supermarkets, Store, hotel, Restaurant, etc., and ideal for glass panels, door, Windows, partitions and many more. Even if it is a home solution that you are looking out for, also then our this Patterned Window Film collection is probably more appropriate.It is better to Just select the pattern in clear rather than in a coloured version.

An element of privacy from the outside world, especially when your home is located in a busy area or has a significant number of windows, can be achieved with window tinting film or Privacy Frosted sticker. The privacy of window tinting film or the frosted film is a desired comfort for many, giving you peace of mind that a passerby is not able to peer in and see you and your family. Thus it provides an added privacy to the glasses at your place.

During a newly-built or a renovation project, window tinting film should be a topic of discussion when considering improvements for the Elegance or curb appeal of the property. Solar films and decorative films add that sleek, elegant look to the outside of your home and are often one of the key benefits for those who are interested in these products. Window tinting does provide many of the benefits and also they are indeed aesthetically pleasing as well when we talk of the appearance.

When it is about that of the, bathrooms, privacy is of the utmost formost importance and a frosted film or patterned film would be a better ideal solution in most of the cases. However, if your bathroom is at close proximity to a neighbour's window, or on a ground floor, we would recommend our White Frosted Window Film which is more opaque and ideal for bathroom window glass or door glass.

Since it adds up the “Frosted” effect to, it blurs the transparency of the glass and increase in the privacy is attained of whatever is inside the area enclosed by it.

If you are looking for a temporary solution, or for a window film that can be removed easily after a short period of time, our Privacy window films when once installed can stay for a very long period of time, and will possibly easily come out off the glass whenever it is removed by just peeling it out with ease. In the right conditions, they will stay on for years and can be removed in seconds making them ideal solution for rental properties. For privacy, we have a range of frosted, patterned, black and white frosted sandblasted and etched glass window film.

Some of the most important Essential Features and advantages of using Sandblasted window film are as under:

White translucent window film or Sandblast film has a similar appearance to sandblasted glass. However, the white translucent window film is in fact a better product than sandblast glass because if water is splashed on it, it does not go clear. Sandblast glass in rainy conditions goes blotchy and does not look appealing where as the sandblast film looks appealing even after it. White sandblast translucent film is always applied to the inside of glass and is brought to utilization by interior designers where daytime and night time privacy is required in certain circumstances. One of the beautiful part of this type of window film is that it alongwith maintaining the privacy level allows an adequate amount of the natural light to come in and does not create dark areas. Once applied, it gives a soft white bright appearance internally and externally and is very popular in office glass partitions, doors and windows. 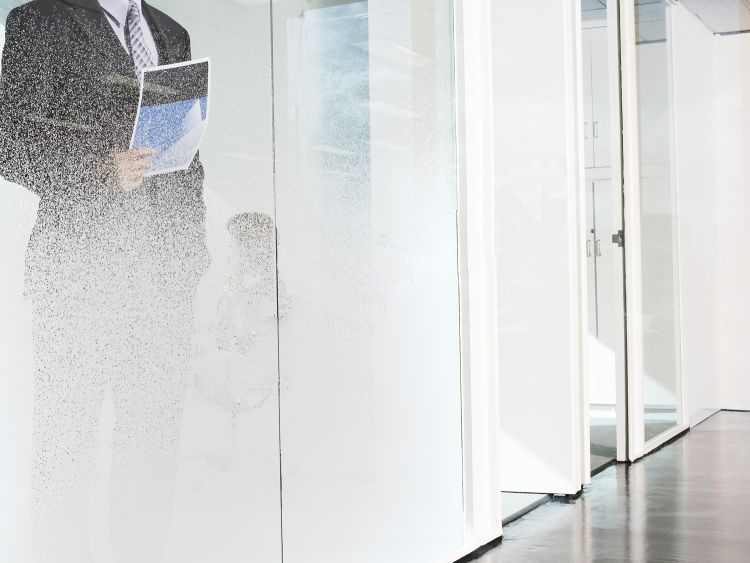 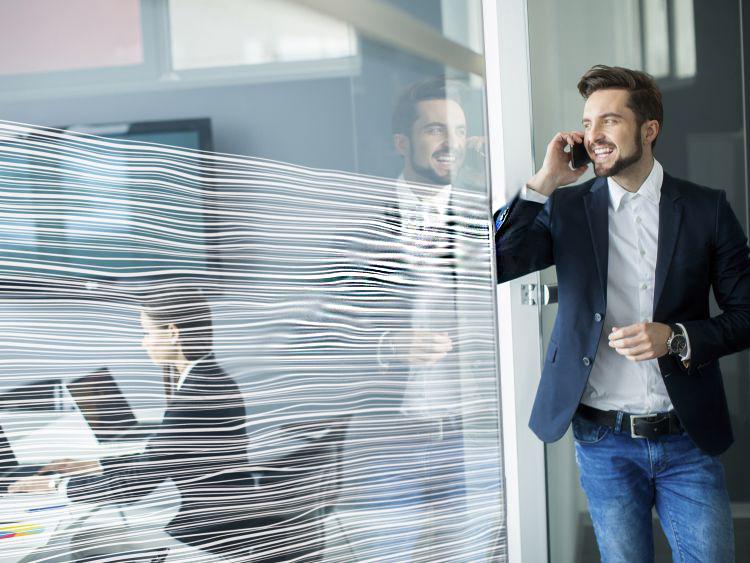 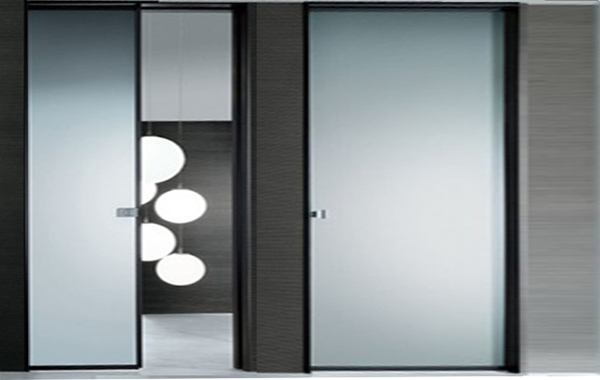 Before you can consider window film, you need high quality, long lasting windows. When UAE Offices, Companies, Hotel, Restaurant, Buildings, etc., like to get their glass door, Window and glass panels, they turn to the Sandblast Privacy Film experts(PRESTIGE WINDOW FILMS) to have their designs and ideas printed and cut on the Privacy window film adding up to Decorative windows with a beautifully enhanced look. We guarantee you’ll find the perfect film for the windows for your home! It’s no wonder we’ve been proudly serving the UAE region for over a decade. Get a free quote now!

Get in touch with us now. We are always Glad to provide more information and answer more question on the suitable window films for your place. 0 4 334 4465 or +971 543435073 or Mail Us for a Free Quotation. You may also fill up the form on our website.

Please feel free to enquire with us for further more details on Decorative Window Film.